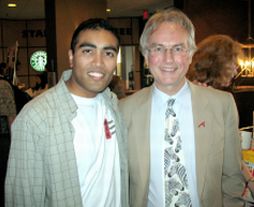 The Archbishop of Westminster, Cardinal Cormac Murphy-O'Connor, recently said lack of faith was 'the greatest of all evils', a claim that comes in the wake of his declaration that atheists are 'not fully human.'

He cannot be too serious, reckons Hemant Mehta, the blogger who hopes to bridge the divide between the religiously inclined and the sceptics, without the vitriol usually exchanged when such groups meet -- and he does this through his site friendlyatheist.com

Mehta, 26, a graduate student at De Paul University and a math teacher, says that while he bows only to Reason, he has found that mature discussion with people who disagree with him makes considerable sense.

"I am not trying to upset people with what I write. I think many atheists end up doing that," he says. "When you see you're living in a religious society and believe that you (as an atheist) know what is going on, you want to yell it out and bring down someone."

What he wants to do, he says, is not bring people down, but convince people to see what he has to offer. "I am not militant about (faith), not angry about it, just sceptical," he says, adding that he will not gratuitously poke fun at people who hold contrary views.

"The belief in the supernatural -- that's what I'm really battling. You can say you believe in Tirthankars, you believe in karma and you're reincarnated. We may not have a God in Jainism but you can attain Nirvana and become a supernatural being. That's the same thing: part of the same mystique and belief system that I want to convince people to break out of."

Mehta had his personal epiphany when he was 14 -- and in the Jain family he grew up in, it caused his parents some disquiet.

"They were disappointed. They are still disappointed. But once they realised that nothing else changed about me, (that) I was not a bad person, they began to be okay," he says, admitting there still are arguments, though not as many. And while his younger sister is not very religious, "she thinks I'm too far on the other side for her."

Mehta could have maintained his religion and done without a God, if that was all he wanted, since Jainism does not have a supreme deity. But he still felt he had to announce his atheism.

Mehta first came under the media spotlight when he decided to auction his immortal soul on eBay to the highest bidder -- or, rather, he proposed that for every $10 of the winning bid, he would spend an hour at a church service.

It triggered unexpected response: the religious bid to save his soul, the sceptics bid to stop him from losing his Reason.

Jim Henderson, who had a past in evangelism, won with a $504 bid -- which translates into at least 50 church visits. Mehta found there was much to learn from some of the churches he attended, though certainly not all.

And just so you know, the money collected did not go to churchofsatan.org but to the Secular Students' Alliance (www.secularstudents.org), a group that teaches people in school about the intellectual basis of secularism.

The experience led, first, to a string of media interviews including with The Wall Street Journal and the Chicago Sun-Times, and finally to a book, I Sold My Soul on eBay. But his site has become far more popular than his book, Mehta admits.

Referring to his mandatory church attendance, he found that, despite the bad press, it was the bigger churches that had the most interesting things to say. And while some churches went farther right than he felt comfortable with, and stridently argued against evolution and gay marriage, some small churches were liberal, arguing for social justice and helping the sick, poor and hungry.

"I don't care if they believe in God," Mehta says, pointing out that what he does not like is when the religious get involved in politics and policies.

Mehta does have to address the essential conundrum confronting the atheist: that while arguing the atheist cause, he cannot prove something does not exist. Just as an 18th century scientist could not deny the existence of the then fabled gorilla, could Mehta reasonably argue that there was no God?

"I wouldn't make that argument, and I don't know many atheists who do. An atheist is someone who says I don't believe there is a God. Even (atheist scientist and writer) Richard Dawkins said if you want to go on a scale of 1 to 7 -- 7 being you absolutely don't believe and 1 being you absolutely do believe -- he puts himself at 6. Because in the final analysis, you cannot prove a God doesn't exist."

Proving the non-existence of God is not however the point, Mehta argues. "I've just not seen any reason to believe something's there. Religious people say 'I know God is there.' They can try to prove it, but I don't think they're going to succeed. The religious people are the ones saying something is happening -- and it is up to them to make the case. They've done a bad job of it."

Interestingly, Mehta finds common cause with the faithful in their desire to convert people. "I understand why they want to convert me to their cause. (But) they do it in the worst possible way. They come when you are busy, on the street. They knock on the door. They don't want to know about me. They just want to tell me about Jesus."

"We have thousands of gods," he points out, arguing that such a plethora created its own dichotomies. This in turn results in the fact that over the centuries, religions have come and gone, with few if any showing the ability to last. Now people are "gung-ho about Christianity, the mythology of our time," he points out, as part of his suggestion that what is fashionable today could be extinct tomorrow.

Through his site, Mehta hopes to reach out to people who have no need for a supreme being and wonder if they are alone in having this idea. "When I became an atheist, I didn't know other atheists. Part of the reason people don't know other atheists is that (atheists) are afraid to come out," he says, adding that his site suggests that it is okay not to believe.

By the doubtful, he does not mean his friends who claim to be beyond religion and still ask him for his sun sign. And he stresses the point when discussing an advertisement he put up on a matrimonial web site.

Although he's a vocal atheist, Mehta does not believe in taking to the pulpit, with himself playing a secular preacher. "I do as many (blog posts) as possible as open-ended discussions... I let the audience comment on it. There are 75 to 100 comments. It is more useful to hear a bunch of different perspectives than my own," he says.

His blog currently gets between 6,000-10,000 page views every day, and about 20,000 unique visitors a month. And while he is what the stridently religious may love to hate, he says he gets far fewer nasty messages than other comparable blogs. This absence of virulence could be an outcome of the tone he takes in his site: confident without being arrogant, respectful without being obsequious.

He advises prospective bloggers to test the waters first on a free blogging site. The free templates and structure ensures that newbies don't have to worry about maintenance.

But if and when they get serious about it, they need to buy a domain name that reflects their views, and then post regularly, not just once every month while also linking to sites that they hope will link to theirs.

His views may not be everyone's cup of tea, but Mehta in his avatar as professor has not yet had to deal with irate parents wondering if the math teacher is brainwashing their kids. In fact, his view is reflected in the view of a religious person who, describing his book, described it as "a good reminder that people, even those who disagree with our beliefs, are not the enemy."

It could just as well have been a description of Mehta.

Five of his favourite blogs