The first time Dhaval Chadha's thesis reader at Harvard, Professor Paulo Barrozo, suggested that he could work at the CDI (then called the Committee for Democracy in Information Technology, now the Center for Digital Inclusion) in Brazil, Chadha laughed and said, 'I may be Indian, but that does not mean I know all about IT!'

Now, in about a year-and-a-half, Chadha, 22, has become the manager of Innovation and Enterprise at the CDI whose Chief Executive Officer Rodrigo Baggio was named a few years ago as one of the 10 Principal Voices in Economic Development by CNN, Time and Fortune, together with Jeffrey Sachs and Nobel Laureate Muhammad Yunus. 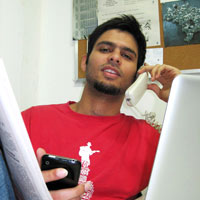 Chadha now is preparing to take the CDI concept of using digital technology to empower the marginalised people to India.

"By partnering with grassroots organisations and cyber cafes," he explains, "the CDI creates centres in low-income communities, rural and indigenous communities, hospitals, etc. These centres work with local marginalised people to help them identify the key challenges they face and tackles their problems using technology. This could mean using presentations, videos and blogs as tools for social mobilisation, this could mean running e-mail campaigns for civic advocacy and many other things."

The CDI has won over 60 international awards including from the World Economic Forum, UNESCO, Microsoft, Clinton Global Initiative, and Tech Pioneer. It is today a network of 753 schools and 1,243 cyber cafes in 11 countries.

Chadha has a degree in social studies from Harvard, where he focused on international development and community organisation and completed course work in economics, sociology, philosophy and religion. The son of Jagdeep, a businessman, and Priyamwada, an architect, he studied and grew up in New Delhi before coming to Harvard.

"My parents never really encouraged me to head to the social/ citizen sector and in fact had many of the usual concerns about low salaries and standard of living when they found out what I would be doing," he says. "That said, they have always insisted on a very sound education and made sure that my brother and I developed into strong individuals with diverse interests and open minds. Although I studied at Harvard on a full scholarship, I would not have made it that far without the right schooling and their support up to that point. I credit my mother with instilling integrity and sincerity in my work ethic and for being a very inspiring figure. They have been supportive of my decisions more recently.

"I went to Brazil the first time in 2007," he continues, "to explore my sense that there was a lot of dynamic activity in the social sector in Latin America. My hope at the time was to learn more about the different models being implemented with the possibility of eventually taking my best learning to India."

The Benjamin A Trustman Fellowship he received from Harvard for postgraduate work gave him the chance to return to Brazil.

"Latin America offered a range of very interesting case studies," he adds. "I wanted to travel there to get a closer look at the best models. When I started researching programmes to spend a semester there, I found that most Spanish-speaking countries had a language requirement/ prerequisite that I did not meet, whereas the programmes in Brazil did not. The decision was made much simpler!"

He first became familiar with social entrepreneurship in his senior year of college. "I heard about [the social entrepreneurship collective] Ashoka and [its founder] Bill Drayton from some friends and read up about them. It was something new to me that seemed very interesting but that I did not understand very deeply," he says.

But he was certainly not going to be a Wall Streeter.

Over a year ago, he was one of the handful of Harvard students who drew the attention of The New York Times because they were not enamoured by the big Wall Street cheques and were going to seek out public service.

'I don't think a lot of people at Harvard know what a hedge fund or a consulting firm is when they start,' he told The Times. But the seduction starts, he added, when the recruits from mega firms invade the university and take the students to expensive dinners and 'start throwing salaries around'.

"Wall Street and similar jobs were something that became unattractive to me very early," he says. "At high school, I had very little knowledge about them and yet what turned me off was the fact that all that mattered was salaries. Success was measured in digits and everyone hated their jobs. I decided early on that I did not want to spend 15-plus hours a day working in a job I did not like just to make my first million before I was 30."

But he also admits that today he has "a more nuanced understanding of the situation, because many people have to take those Wall Street jobs to repay college loans".

In Brazil, he began to hone his social entrepreneurial skills.

"Much like the private sector, the social enterprise, NGO and hybrid sectors need lawyers, doctors, managers, accountants etc," he says. "I found that I have a strong interest in entrepreneurship, strategy and innovation and plan to be involved in these activities in the social sector for a long time."

"I spent my first two weeks trying to understand each of the different departments -- Institutional Development, Marketing, Operations, Finances -- and what exactly they did so see where I could be involved," he says. "Then one day, the ID manager came to me to see if I could help Mauricio [Davila] on a proposal he was writing in English to expand the CDI globally. I said that I would be more than happy to and asked what his extension was so that I could call him. She gave a very blank stare and after a few seconds of silence enlightened me -- Mauricio is the director of the CDI in Europe and I could reach him on Skype. That is how I first got involved with fundraising and institutional development!"

"A very big professional challenge that I have faced at the CDI," he continues, "has been the lack of close management. Rather than organisation with one or two entrepreneurs, a few managers and many operational employees, the CDI is an organisation full of entrepreneurs. For an NGO with such few staff members -- the office in Rio de Janeiro has just about 25 workers -- the CDI does an awful lot. It is a fast-paced environment and everyone is working on many different projects at the same time. This means that there is little training and zero babysitting. To be effective, one has to take initiative, learn how to manage time and most of all, prioritise. This is probably a challenge faced by many professionals, especially in the nonprofit sector, but one that I am still learning to deal with!"

Never give up on your dream

Her fight for the defenseless won her a fellowship