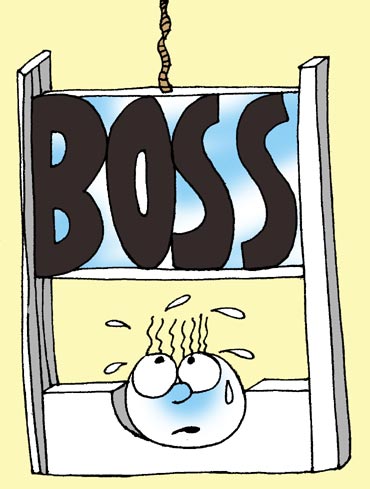 The next time you want to play hookey by calling in sick at the office, think twice! Illustration: Uttam Ghosh

Your boss may be a kind-hearted gentleman, but nearly three-quarters of all bosses in Britain rarely believe staff who call in sick, a new survey has found.

According to the survey, a similar proportion of bosses say they are less likely to give someone a promotion or offer them a pay hike if they regularly take time off sick.

However, a third expect staff to turn up even if they are genuinely sick -- and have diarrhoea, flu or a broken arm, the findings revealed.

The figures emerged after researchers for cold and flu medicine Sambucol carried out a survey of 3,000 British bosses.

"British bosses have very high expectations of their staff and only expect people to take time off work when they are genuinely feeling really terrible," the Daily Express quoted spokeswoman Lisa Harrison as saying.

Has your Doubting Thomas boss ever cross-checked whether you really were ill? Have you ever been caught out faking health issues to get out of a work day? Tell us your excuse at work story!

Simply e-mail us at getahead@rediff.co.in (subject line: 'My excuse at work') and we'll publish the most interesting entries right here!

7 ways your job could shorten your life