Against all odds: Shoeshine boy cracks the IIT JEE 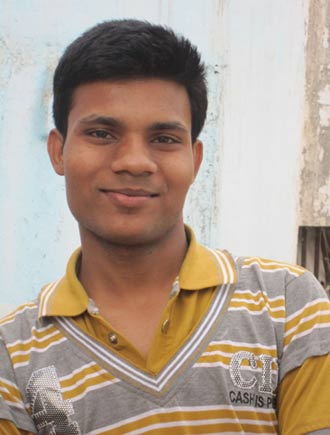 Sharat Pradhan journeys to one of India's poorest neighbourhoods to meet a young man whose success has made headlines.

In bustling Kanpur, the crumbling industrial hub of India's most populous state of Uttar Pradesh, a shoemaker's son made history last month. Abhishek Kumar Bhartiya, 17, was selected for admission to one of India's -- and indeed one of the world's -- most prestigious engineering schools -- IIT-Kanpur.

The Kanpur boy scored an amazing 154th rank among 13,104 successful candidates in the intensely competitive all-India IIT entrance examination for admission to 15 IIT schools across the country. That's simply a miracle considering that nearly 500,000 students write the exam after months of vigorous study and coaching.

Abhishek plans to opt for aerospace engineering at IIT-Kanpur. Ever since he maxed the exam, and with style, Abhishek has turned into a celebrity. Television cameras have made a beeline to his simple tenement home in a narrow lane of the Ganga Vihar slum colony in a remote corner of Yashoda Nagar, in south Kanpur, that bakes and blisters in the mid-summer heat, its garbage and filth attracting swarms of flies. 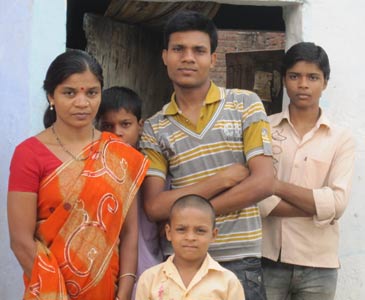 Image: Abhishek with his mother Sangeeta and three brothers.

In these wretched surroundings Abhishek quite literally burned the midnight oil to achieve his lofty goals. His father could not afford an electricity connection and their home -- located in the heart of urban India -- is unlit. What is even more incredible is that this lad studied night and day sharing space in a single-room home with three siblings and his parents.

The 10 foot by 10 foot room, overlooking a tiny courtyard, accommodates not only the six-member family, but also their humble possessions -- a couple of boxes and a large trunk. The home's most prized possession is a sewing machine. The machine is a source of additional livelihood for his mother Sangeeta. It also doubles as a study table for Abhishek.

"I do a bit of tailoring to supplement my husband's income," explains his proud mom. She takes in whatever sewing work she can lay her hands on in the area even as she keeps busy running her home and the large family.

Abhishek's spectacular success has allowed this simple woman to gain confidence. That is clearly reflected in her assertion that she plans to push her other three sons into professional careers too. 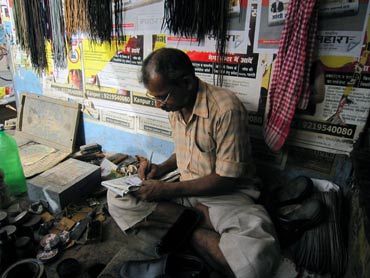 Why did the family not apply for an electrical connection? Says Abhishek's father Rajendra Prasad: "If I could earn enough to pay power bills, I would have utilised that money to buy books which my sons often seek, but we are unable to afford it." Abhishek studied by the light of a kerosene lantern.

Prasad runs a tiny and not too busy shoemaker stall in the neighborhood. The earnings provide him and his family just enough to subsist on. "When my son expressed a wish to study, I decided to put in longer hours and pick up as much work as possible. Thankfully I was able to make anything between Rs 70 and Rs 100 ($1 and $2) a day."

Understanding his father's hardships, Abhishek never hesitated in helping out with tasks in the shoe shop. Polishing shoes, mended by his father, was often his responsibility; something he took up when he got time off from swotting.

On days when Abhishek chose to take a break from his studies, he would be seen doing errands in the neighborhood to earn a day's wage -- invariably to purchase some stationery or a book.

An inspiration to the neighbourhood's youngsters 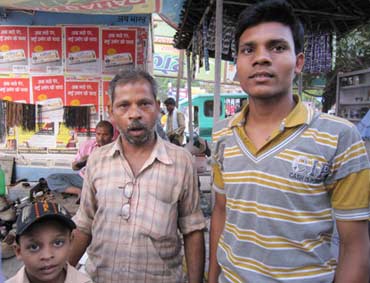 The IIT entrance results have brought an overnight change in his life. Says Abhishek, "There was a time when I was clueless about what the IITs were. It is thanks to my science teacher Mr Sandeep Bansal that I got to know about them. He told me one day that I should appear in competitive examinations for engineering courses, especially the IIT entrance exam, which he said was the toughest."

Abhishek was in grade 11 at the time. "There was something within me that told me that I must put in all my energies to make myself into a success story," he says with pride. "And while my teacher Bansal Sir was a great source of inspiration for me, I am also grateful to the private coaching centre Bhabha Classes (nearby) that allowed me to attend their classes without charging any fees."

Until yesterday the biggest worry weighing on Abhishek's mind was how he was going to afford the expense of an IIT education. But the local Rotary Club, the coaching centre, as well as a host of other voluntary organisations have offered to meet his expenses.

Today the 5 ft 10, smart-looking Abhishek is all set to walk into what was until yesterday his "dream".