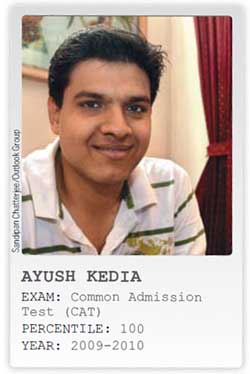 The son of a retailer in Kolkata, Ayush Kedia graduated in 2008 from NIT Durgapur with a BE in Computer Science, and went on to work as an assistant systems engineer with IT major TCS. He took the CAT three times. Third time lucky, he finally got a call from IIM Ahmedabad, Bangalore, Calcutta and Lucknow.

Tell us about giving CAT, thrice...
First, during my final year of graduation. Then the year after. Both times I scored around 98 percentile. I did not get an interview call from any of the IIMs. Clearly focused on the IIMs, I did not apply to any other institute.

So where do you think you lacked earlier?
Typically, many engineers have a similar problem; while we may fare well in two sections ie Quantitative Ability and Data Interpretation, we have trouble with Verbal Ability. So this time round, I devoted all my time to English and that's what made the difference.

How did you prepare for English this time round?
The problem with English is that nothing can be done in a day or a month! It takes a lot of time because it has to be inculcated in you, it can't be mugged. I developed a habit of reading newspapers like The Hindu and The Telegraph and more than that formed an English conversation group with my friends. This helped me improve my confidence while speaking and writing English. When you attempt the mock exams, you slowly start identifying the mistakes that you are making in the exams, and I focused on improving on that. Practice is the key to mastering English!

Did you take mock tests? Your experience.
I prepared only via mocks and must have given 30-40 mock tests! I took the mock series by Career Launcher and TIME. I focused on analysing my mistakes in the mock test. Your mock results prepare you on the emotional side for the kind of result you can expect in the final exam as well as the practical side of it: where you stand, your mistakes and identifying them, was more important to me.

Tell us about this English conversation group.
We were a study group of four or five people who were preparing for CAT very seriously. So, we decided to converse with each other only in English. If you see the explanation for the answers in Verbal Ability in the CAT/Mock CAT, it is often mentioned that a particular choice is the right one because that is how the word, phrase or expression is used in spoken English. We tried to develop a comfort level with the language so that we could express ourselves more freely in English.

How many hours did you study every day?
One hour a day.

So, who do you credit your success too?
My school Sri Daulatram Nopany Vidyalaya in Kolkata where the standard of Mathematics is much higher than that taught elsewhere.

I also credit my primary school teachers who laid the foundation in the basics, which improved with practice. Without these, it's very tough to crack the CAT in my opinion.

Secondly, to my friends from my English conversation group. To begin with, my group of four to five friends I studied with. They were the real inspiration because constantly if you desire something and are strategising for it, that helps the most.

Last but not the least my family. There is a tendency in business families to push children into business after graduation but my dad gave me time and the liberty to think and take my own course. He said, "It's your decision and you have to live up to it".