What should Rahul wear to his wedding? 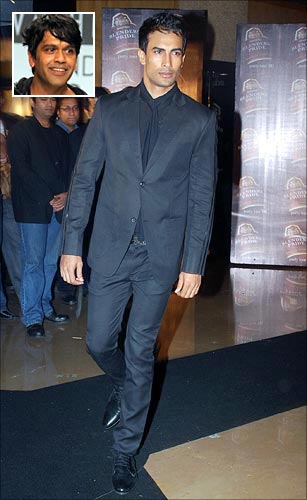 With Rahul Gandhi's 40th birthday coming up on June 19, we're guessing it's only a matter of time now before the countdown to his wedding begins (note to Soniaji -- start looking for baba's bahu already).

So we asked leading Indian designers to weigh in on what a possible future prime minister of India should wear on such a momentous occasion. While some were delighted at the very idea of working on Rahul's trousseau, others weren't quite so enthusiastic. In any case, we bring you all their answers -- uncensored!

All about 'creating magic'

Chic coutourier Rocky S had no qualms telling us off for forcing a wedding down the young Gandhi's throat. "That is his personal matter, whether he wants to get married now or later," he said. "But yes, if I get to design his wedding trousseau, it will be my pleasure to do so." Hmmm. You don't say!

Continues Rocky, "It would definitely be a white pathani or sherwani in traditional hand-woven brocades and embroidery, which covers the authentic quintessence of lavishness, giving a distinctive look to his personality."

"It should have a very classy and an elegant look, with fine body cuts to lend that perfect appeal, which Rahul always portrays through his personality and his way of working."

"The outfit will be distinctively embroidered with cutwork and resham embroidery, keeping it simple yet smart, stylish in every aspect and something that creates magic all around."

We can just picture Rahul in Rocky's pathani right now -- it certainly sounds splendid. He'd probably make an entrance on an elephant to keep up the regal image, but we're sure the talented designer will draw a line at having to deck out the pachyderm in similar grand fashion!

'An outfit to suit his personality'

Were it left up to Vikram Phadnis, Rahul would probably look as royal as a Mughal-era artwork -- we can just see him now, captured in colour against a background of foliage, delicately contemplating a fruit.

Says the designer, "If Rahul Gandhi were to get married, I would like him to wear a peachish-orange, asymmetrical angarkha sherwani, teamed up with a cream dhoti. Such an outfit would suit his personality because he is vivacious, versatile and lively."

We just thought of which fruit it could be, too -- a peach! 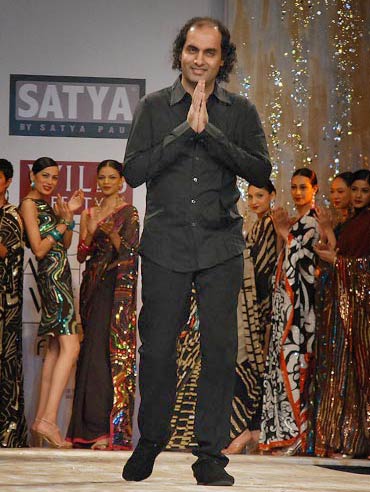 The ever-affable head honcho of Satya Paul, Puneet Nanda was also pleased at the thought of designing for the Gandhi heir-apparent, going into much-appreciated detail about what he had in mind (no, it wasn't a nine-yard sari, but if he's ever giving out one of his breathtaking drapes for free, we'll be first in line).

"I would absolutely have Rahul wear traditional garments -- hand-crafted, the finest garb available," he enthuses. "I would use a fine-count, heavyweight, hand-woven fabric, dyed with natural hues and stitched by hand. Maybe a bandhgala, with a pair of churidaars or a slim pant, embellished with fine, delicate embroidery that has a masculine feel, not at all feminine. Traditional colours would probably look best deep vegetable dyes like natural indigo, deep brown or black."

How about that? From fruity inspiration to veggies, yet!

'A khadi shirt and trousers' 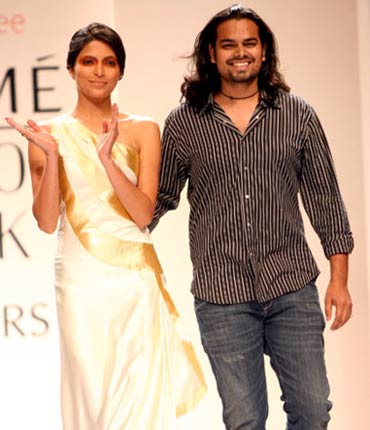 Hailed as the next Sabyasachi, the talented Rahul Mishra was so excited at the mention of dressing his namesake that we think he forgot the part about the wedding.

He said he would have Gandhi dress in a khadi shirt and trousers. "I'd either go with the colour of natural khadi -- off-white -- or indigo. The reason I am suggesting khadi is so as to promote local weavers and craftsmen. It is also something Rahul Gandhi will be able to carry off," he explained.

For his wedding? Really? Anyway, we were too polite to reiterate the question and since we've seen some of Mishra's fantastic work, we didn't. Rahul M, even if you want to deck us out in potato sacks tailored by you, it's fine by us! 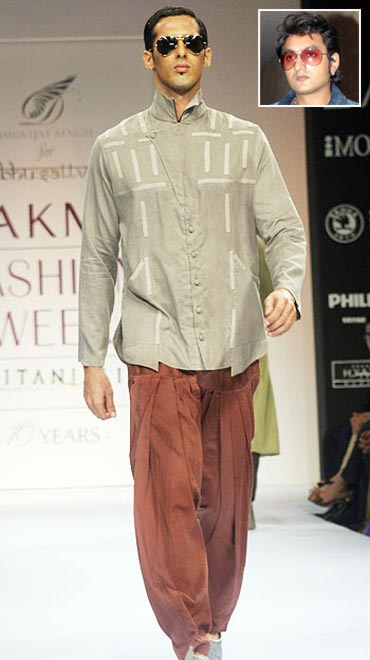 Designer Digvijay Singh was sure to stress on the 'Indian-ness' of Rahul's wedding. In fact, he put it so well that we think he should be bumped up to the future PM's strategic advisor instead of go-to designer.

"He's a youth icon, according to me; he's a youngster who will be leading the country in the future and as a matter of fact, is doing so even now," said Singh. "He moves around in poverty-stricken areas, sitting among poor villagers and tribals and at the same time, he travels internationally, fraternising with the top crop of people. So he seems like a very balanced guy, who can connect with both the poor and the elite."

Singh went on, "For a person like him, khadi, a fabric that denotes Indian-ness, is the right choice. Yes, khadi has been endorsed by politicians but if worn by him, it would definitely make a statement." In other words, the Parliament oldies should take a hint and put away their endless khadi supply, because they only end up looking ancient.

"It would have to be very minimalist, but sophisticated, something both the rich and the poor can identify with. I can totally see him in fine, handloom khadi trousers along with a kurta and coatee or a bandhgala. Of course, the outfit would have to have designer touches that suit his persona." Now you know why he deserves to be strategic advisor? He's got Rahul's image down pat!

"Colour-wise, something not too dull -- he's very young -- it should be bright, but not too bright. Maybe a deep red or carrot tone, or else deep fuschia or purple (which is the colour of royalty) upper garment, teamed with subtle off-white trousers would suit his personality." Rahul who? Come design for us first, Digvijay! 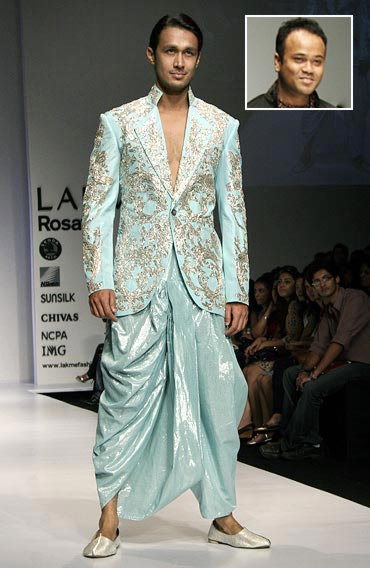 Abdul Halder, known for his opulent, glam-tinged ensembles, would go surprisingly low-key if he were to deck up Rahul for his wedding and seemed surprised that he's turning the big 4-0 this year.

"Rahul looks very young, not at all 40!" he exclaims. "So first off, congratulations to him. He's very good-looking and I think subtle, nice clothing would be best -- a sherwani, perhaps, with pure metal buttons up to the mid-thigh, along with dhoti or churidaar pants. Colour-wise, we'd go for beige or fawn."

Says Halder, "He's got a lot of shine in his face and he's a charming person, a strong personality, so there would have to be a balance in his clothing, nothing too flashy."

Hear that, Rahul? Even if you want to dance the Funky Chicken at your reception, you'll still be doing it with dignity, if you leave things up to Halder. 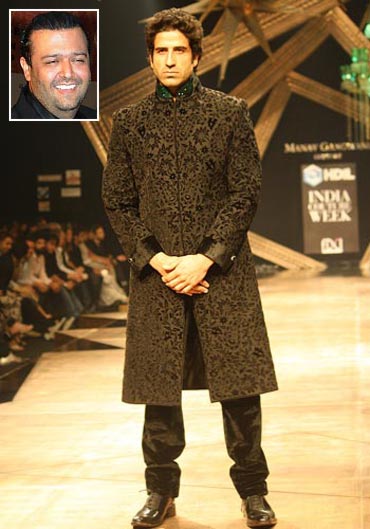 Manav Gangwani, desinger to the stars (half of the IIFA attendees showed up in his designs), seems to agree with Halder. "I think if he gets married he will end up wearing a very simple white sherwani," he muses. "He's got a simple personality".

"I don't think he'd go the flamboyant route, in a sense that he will don something suitable but at the most it will be a sherwani."

Looks like Rahul's austere values are rubbing off on all and sundry, so he better be ready for a low-key affair. Let's just hope that the bride-to-be is not a Rakhi Sawant type who wants him to shine like a disco ball on their wedding day! 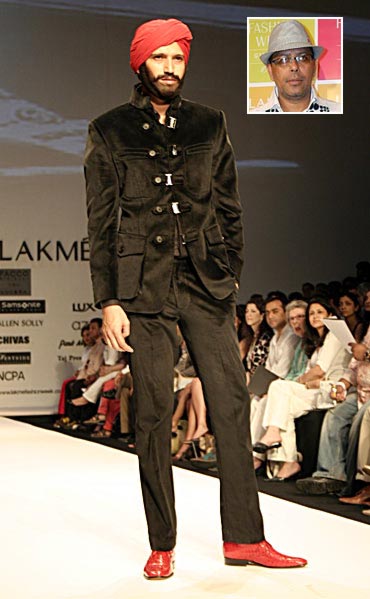 And finally, we come to the inimitable Narendra Kumar, who in his trademark straight-forward style informed us that Gandhi scion or no, he was not interested in designing anything for Rahul, let alone his wedding togs.

"I don't design for politicians!" he said, very matter-of-factly. "Whatever Rahul Gandhi is doing and wearing is just fine."

How about that? Maybe with his penchant for being blatantly honest, it should be Nari who enters into politics!