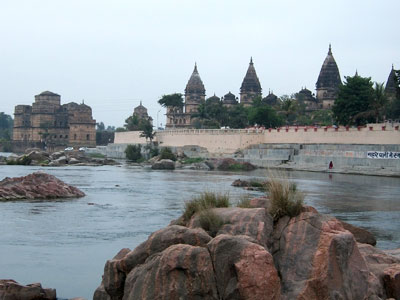 Commercialisation has a way of stripping a town of its identity and covering it with a layer of familiarity. There are very few places that remain hidden from the hustle of touts and the bustle of tourism and it is indeed a memorable experience when you discover one of these.

Such is a gem hidden in the heart of the Indian state of Madhya Pradesh called Orchha.

Literally meaning 'hidden place', Orchha really is like that precious feather a child finds on the beach and wants to keep hidden in the shoebox, lest someone spoil it.

A mere 16 km away from Jhansi and 170 km away from Khajuraho, its lack of direct connectivity is perhaps the reason it has remained a hidden secret for so long. Nevertheless, for the adventurous traveller, Jhansi is very well connected by train to all major Indian cities and any rickshaw from the railway station will take you the remaining 16 km for a mere Rs 100.

As you leave the traffic of the city behind and you drive through a narrow winding road with fields on either side, you almost feel like you are going back in time. The entry into Orchha is as unassuming as the place itself and before you know it, you find yourself in the lap of history.

Going back in time 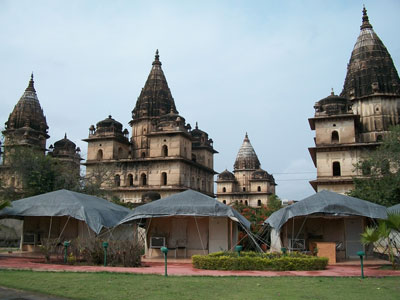 Image: Swiss tents with chattris at the Orchha Resort

The town is concentrated on one side of the Betwa river and most sites are easily traversable by foot.

Though a traveller has many options to stay in Orchha such as the Bundelkhand Riverside Resort, Orchha allows you to literally relive the times gone by with a room in the erstwhile palace within the fort. Called Sheesh Mahal, the Madhya Pradesh Tourism Government Hotel may not offer the luxuries of a 5-star hotel but compensates with some great period decor in the rooms and the chance to wake up feeling like a king.

If you don't mind roughing it a little, the best place to stay in Orchha is at a property called 'Orchha Resort'. Give their rooms a miss and book yourself a Swiss tent instead. Set up around a courtyard on the banks of the river and overlooking the cenotaphs (chattris), when you wake up and come outside your tent, you feel like you are living in a heritage monument. The location is stunning and peaceful. It is the perfect place to wind down after a long day of sightseeing. 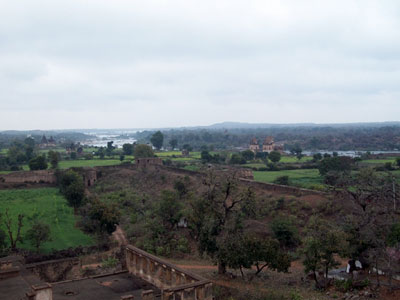 Orchha is the perfect weekend getaway from Delhi or Mumbai. An overnight journey away, the town demands a minimum of a two-day visit to do it justice.

We initially planned just a day at Orchha followed by a day in Jhansi to see the fort but one look at the place and our plans were altered to make more time for there.

It was founded in 1501 AD by the Bundela chief Rudra Pratap Singh, who became the first king of Orchha, and also built the Fort of Orchha. During the rule of Akbar's son, Jahangir, his ally, Bir Singh Deo reigned here, and it was during this period that Orchha reached its height (the many opulent palaces a reminder of its architectural glory, including Jahangir Mahal and Sawan Bhadon Mahal).

Folklore suggests that when Jahangir had a quarrel with Akbar regarding the woman he loved (Anarkali), he left his kingdom and came here to his friend who promised to support him if there was a battle.

A glimpse into India's glorious past 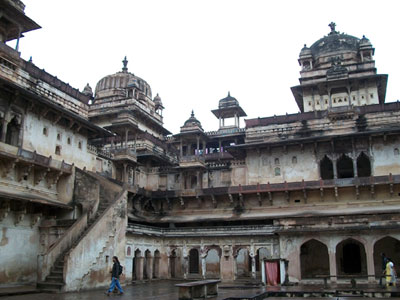 Image: Inside the palace complex

The beauty of Orchha is that it invites you to walk around the entire town and slowly take it in.

The fort consists of various connected buildings erected at different times, the most noteworthy of which are the Rajmandir and the Jahangir Mahal.

The Jahangir Mahal, supposedly built for the Mughal prince Jehangir who had left his father, is an ornate structure interspersed with towers, domes and balconies. We were told that the Jahangir Mahal is considered a singularly beautiful specimen of domestic Hindu architecture, and one look at the palace will leave you in no doubt of the authenticity of the statement.

If you give the guide a small tip, he will also offer to open the sleeping chambers of the king and queens, the ceiling and walls of which are covered with murals, mostly from the Ramayana. We have visited many palaces across India, but these murals were unique in the stories they depicted and the interesting designs in them. For example, one wall had a painting of an elephant which, on closer look, was actually of eight women positioned in the shape of an elephant.

After the fort, we crossed the moat and walked up to the Chaturbhuj Temple. Unfortunately now a neglected site, the atrium of the temple must have been breathtaking in its heyday!

The ticket which allows entry into the fort and the temple is sold at the fort's main gate.

View from the top 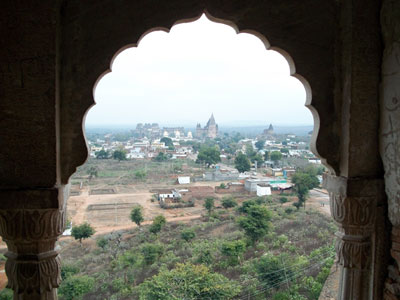 The next day we woke up and stared in awe at the cenotaphs in our backyard. After a quick cup of tea, we went on to explore these. These chattris were built for the last rites of all the kings and queens.

A short walk up a hill took us to the better-maintained Lakshmi Temple, the ceilings of which were adorned with murals similar to those in the palace.

The terrace of the temple gives an unrestricted view of Orchha, green fields, domes dotting the skyline and the river lazily flowing through. Time and deadlines lose meaning in the serenity of such stillness.

Later in the day, we packed our bags and said our farewell to this quaint little town so content in its beauty and no ambition to be on the world map.

I am almost in two minds about whether to let this secret destination out, lest it be spoilt. But as they say, all good things are for sharing. So if you have a free weekend and if history and architecture excite you, Orchha begs to be visited. It is to India what Luxor is to Egypt!

Quick tips for your trip 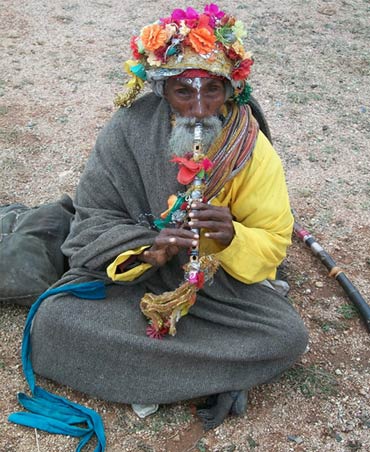 When to go: Being in Madhya Pradesh, Orchha has extreme temperatures. The best time to visit is early February or October-November.

What to buy: Surprisingly, you will find some beautiful brass showpieces there. We bought a stunning Buddha statue.

Where to eat: The restaurant in your resort is your best bet. The Sheesh Mahal's restaurant is a nice place to break for lunch after walking around the fort.