Look: The latest in diamond-studded lingerie 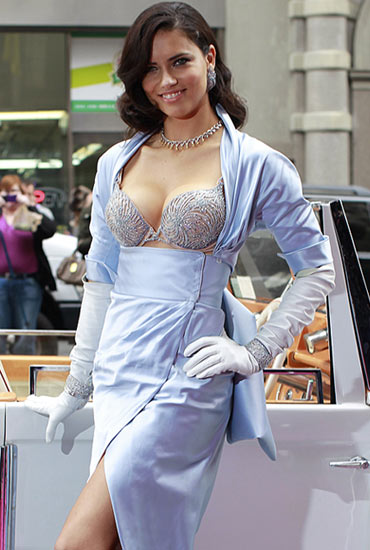 Here's a first look at the last word in high-end lingerie!

Brazilian model Adriana Lima was photographed showing off her assets in a 2 million dollar diamond-encrusted bra in New York.

Lima, 29, who wore a pale blue satin gown, which was cutaway to reveal her chest completely, was modelling the Bombshell fantasy bra at Victoria's Secret Soho store in New York, the Daily Mail reported.

The bra, which had been designed in collaboration with Italian jeweller Damiani, contained more than 3,000 jewels, and it took six craftsmen 1,500 hours of work to complete.

The model attracted a number of stares from men and women alike as she stood on the pink carpet, and a security team was required to safeguard the bra's incredible 142 carats of white diamonds, topazes and sapphires.

The Salvador-born beauty is the second highest paid underwear model in the world thanks to her mega bucks contract with Victoria's Secret, coming behind former fellow Victoria's Secret model Heidi Klum.