News
Business
Movies
Sports
Cricket
Get Ahead
Money Tips
Shopping
Sign in  |  Create a Rediffmail account
Rediff.com  » Getahead » Topperspeak: IIT-JEE is not everything in life 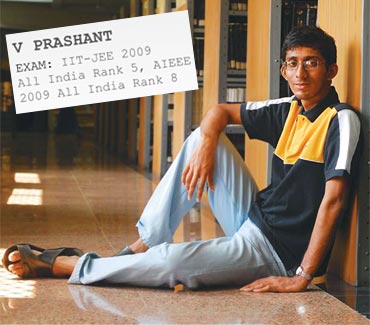 Chennai boy V Prashant began preparing for IIT-JEE when he was in Class 9. Ironically, he believes that students take
the exam too seriously! The IIT-Chennai student shares that he grew up idolising former President APJ Kalam and eventually plans to get into serious research. In his free time he plays the harmonica and reads Sir Arthur Cnan Doyle, his favourite author.

How did you prepare for IIT-JEE? When did you start?

I began seriously preparing for the exam in Class 11, but I began attending classes at FIIT-JEE in Class 9 and 10.
At that stage, I did not take it too seriously. I would attend the classes, which were conducted once or twice a Week. But in Class 11 and 12, I joined SMART, a local coaching centre. I would attend classes two to three times in a week on weekdays. I would also attend a Sunday batch at FIIT-JEE.

Tell us about your study schedule.

Normally the classes took two to three hours and I could study only a little after attending them in the evening.
When there were no classes I would study for two or three hours on my own. I had no particular strategy but followed
one maxim: "Study whatever you find difficult." I did not enjoy Chemistry because I was not good at it. So, two
months before IIT-JEE, the only thing I would study was Chemistry and Mathematics. On the other hand, I found
Physics pretty easy. Coupled with that, the fee also wasn't much then, though it did increase significantly
afterwards. When I was in Class 11 and 12, I got a 75 per cent scholarship for my coaching fee.

Did you attempt any test series also?

FIIT-JEE has this All India Test series, which I took and found very useful because you get to write the exam
with people from all over the country and you get to know where you stand in various subjects and topics.

How was your performance in the mock tests?

I had a consistent performance in the mock tests, hovering near 98 percentile. Though I was not amongst the toppers
there, the test series helped me identify my weak points and I could focus on working hard on them. I always used to
score well in Physics but my performance was not so good in Chemistry and Mathematics.

So how did you work towards your Mathematics and Chemistry score?

For Maths it was more of problem solving. It teaches you how to approach the problem and this sense comes only from experience. Chemistry was always a little vague for me, so I just kept reading up. It involved remembering a lot
of things like equations, properties of elements etc. My problem was that I was not able to retain things for long; I would keep on studying and forgetting everything. So I just focused on revising again and again.

Is Chemistry all about mugging up information?

No, there is a logic behind the equations, which I was not able to get very clearly. But with more revision, things
started becoming clearer in terms of the logic, and I could retain more.

Which school did you study in?

Till Class 10 I was in a different school, but I did my 11th and 12th from P.S. Senior Secondary School because
my old school didn't have CBSE syllabus but followed Tamil Nadu State Board. I preferred the CBSE pattern because it is more application-oriented.

How did you strike a balance between board exams and the IIT-JEE?

What is your long-term career goal? And what do you think you would have done if you did not crack IIT-JEE?

I want to get into research, which means I will be pursuing a Master's degree after graduation and then a PhD. I plan to do research either in the field of Computer Science or Physics. If I did not clear IIT-JEE, I would have taken admission in whichever college I got, through AIEEE. But I would not have appeared for IIT-JEE again. I would like to convey to all the students who are appearing for IIT-JEE that this exam is not everything in life. I know people who get so down if they don't crack JEE, I think they take JEE too seriously!

Do you have a role model?

I was inspired by all the scientists I read about but I have a special liking for former President APJ Abdul Kalam. I
admire him not only for his professional achievements but also for his character, the way he was with his co-workers etc. I think that is why he is one of the most respected people in the country today. I have read his book Wings of Fire and was quite inspired by how he started his life from a fisherman's home and how much he achieved.

Who do you attribute your success to?

My parents. They never pressurised me into studying. This helped me a lot in my preparation.

'An entrepreneur can impact lives of many people'