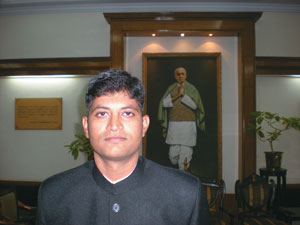 A doctor by profession, Karthik Adapa gave up scholarships to Harvard and Cambridge to join the Indian Administrative Services.

Thinking beyond marks, appreciating the value of each subject and teaching these very subjects to students during his preparation helped him ace the exam.

Now stationed at Ranikhet, a small town in Uttarakhand, Karthik (who was ranked first in the IAS exam of 2008) aspires to make a difference by working at the grassroots...

Why did you opt for the IAS?

It offers a tremendous opportunity for leadership and to work at the grassroots level. For example, I now work in a small town with a population of around 20,000. It is such a backward region that even a little work we do has a tremendous impact on the people here. You also get a chance to impact people's lives across a variety of domains such as health, education, water, sanitation, roads and electricity. In fact, as a topper, I was given the option to go to my hometown in Khammam, Andhra Pradesh but I chose Ranikhet as it's a much more backward place and that's the kind of place I wanted to contribute to.

Medicine is considered a noble profession. What prompted you to move out of it?

I enjoyed being a doctor and in fact, continue to be a doctor even now. In my capacity as an administrator, I organise health camps, where I also serve as a doctor. But what I realised is that as a doctor, the canvas you get to paint on is very small. Health is the only field you can work in as a doctor.

Tell us about life as a student...

I was always a good student, which helped me secure admission to a national medical college. I got a scholarship for a postgraduation at both Harvard and Cambridge. I also got a Bill & Melinda Gates Foundation scholarship for a PhD in Molecular Medicine at Harvard and the Jawaharlal Nehru Memorial Trust Commonwealth Shared Scholarship for my PhD in Cambridge. But I opted for the IAS. In two earlier attempts, I also got through the Indian Police Services, but I let it pass, too.

Three attempts? It sounds taxing! How did you prepare?

I enjoyed the process. I wish I had to give ten attempts so I could study for ten years! You actually grow a lot in the process; the reading is voracious. I look upon it as a way of life and not much has changed since those times for me. I still read a lot, keep abreast of what's happening in the world, in the country, in my state.

Which subjects did you chose during the mains and why?

Zoology and Psychology. Having done medicine, which is Advanced Biology, I wanted to go back to my basics and study Zoology, which is Basic Biology. I also wanted to study one subject that was different and would tell me something I enjoy in life and Psychology fitted the bill well. I worked really hard in Psychology. Though I didn't score too well, it gave me new perspectives to see my life events. It brings about a holistic change in your personality, which happens as long as you don't study merely for marks but internalise the subject. You must appreciate the basics of the subject and study its varied topics.

I referred to basic textbooks like Morgan & King and Barrons. Then you have advanced textbooks for each subject; Coleman for Abnormal Psychology, Pearson's for Education Psychology. I would devote six to eight hours a day, but more than the number of hours, it is the quality and consistency of your studies that matter. I used to be very consistent with my reading.

What did you do differently in Attempt 3, which enabled you to crack it?

I feel I was much more focused and also put in more effort than in my first two attempts; however, some things you learn only with experience. Lesson 1, I learned how to manage my time better after going through the entire process twice. Lesson 2, never to ignore Prelims even after your Mains or your interview because when the results are out, you don't have any time left for the next year's Prelims.

Any interview tips for IAS aspirants...

Just be yourself! The more artificial you are, the more you will struggle. While preparing, 'studying' newspapers is the ultimate thing. I read The Hindu, which is by far the best newspaper when preparing for the Civil Services Exam. While preparing, don't merely 'read' the newspaper, 'study' the newspaper, just like you would a textbook. Underline, make notes, analyse, draw some conclusions, discuss.

Who was the inspiration behind your success?

My teachers and my students.

I taught Zoology and General Studies at Evolution, a coaching institute, during my preparation while simultaneously preparing for General Studies with study material from Rajaram & Ravi, another coaching institute. If I didn't teach a topic well, my students' faces said it all. This would encourage me to study and understand better, work hard and ultimately teach better. So I thank my teachers for teaching me and my students for bearing with me and tolerating me.

How has your administrative experience been so far?

We have a period of independent charge as part of my training. Hence I am at Ranikhet as the Joint Magistrate, for the last one-and-a-half months. I am the youngest but still the leader of the entire team. Hence I need to be the energy and motivator of the team. Ranikhet is located in the hills where everything usually closes by 6 pm. But our office remains open till 8 or 9 pm, sometimes longer. We are trying to make the administration friendlier and improve health, education, etc. In fact, I have lodged the first FIR against illegal mining in Uttarakhand, probably a first in all of North India.