News
Business
Movies
Sports
Cricket
Get Ahead
Money Tips
Shopping
Sign in  |  Create a Rediffmail account
Rediff.com  » Getahead » JK Rowling: 'We do not need magic to change the world'

JK Rowling: 'We do not need magic to change the world' 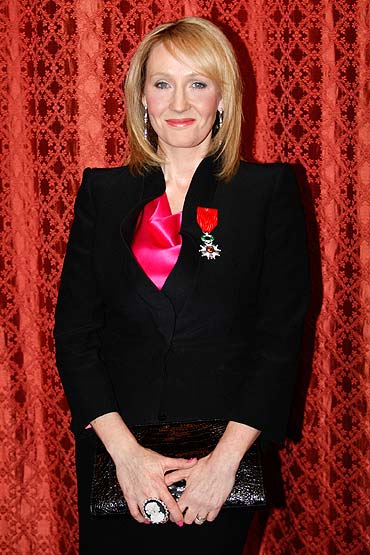 Had she succeeded at anything else, the Harry Potter series may have never been created, author JK Rowling told Harvard graduates. Excerpts from her commencement address.

I was convinced that the only thing I wanted to do, ever, was to write novels. However, my parents, both of whom came from impoverished backgrounds and neither of whom had been to college, took the view that my overactive imagination was an amusing personal quirk that would never pay a mortgage, or secure a pension. There is an expiry date on blaming your parents for steering you in the wrong direction; the moment you are old enough to take the wheel, responsibility lies with you. Poverty entails fear, and stress, and sometimes depression; it means a thousand petty humiliations and hardships.

What I feared most for myself at your age was not poverty, but failure. Ultimately, we all have to decide for ourselves what constitutes failure, but the world is quite eager to give you a set of criteria if you let it. So I think it fair to say that by any conventional measure, a mere seven years after my graduation day, I had failed on an epic scale. An exceptionally short-lived marriage had imploded, and I was jobless, a lone parent, and as poor as it is possible to be in modern Britain, without being homeless.

So why do I talk about the benefits of failure? Simply because failure meant a stripping away of the inessential. I stopped pretending to myself that I was anything other than what I was, and began to direct all my energy into finishing the only work that mattered to me. Had I really succeeded at anything else, I might never have found the determination to succeed in the one arena I believed I truly belonged. I was set free, because my greatest fear had been realised, and I was still alive, and I still had a daughter whom I adored, and I had an old typewriter and a big idea. And so rock bottom became the solid foundation on which I rebuilt my life.

You might never fail on the scale I did, but some failure in life is inevitable. It is impossible to live without failing at something, unless you live so cautiously that you might as well not have lived at all -- in which case, you fail by default.

Failure gave me an inner security that I had never attained by passing examinations. Failure taught me things about myself that I could have learned no other way. I discovered that I had a strong will, and more discipline than I had suspected; I also found out that I had friends whose value was truly above the price of rubies.

The knowledge that you have emerged wiser and stronger from setbacks means that you are, ever after, secure in your ability to survive. You will never truly know yourself, or the strength of your relationships, until both have been tested by adversity. Such knowledge is a true gift, for all that it is painfully won, and it has been worth more than any qualification I ever earned.

So given a Time Turner, I would tell my 21-year-old self that personal happiness lies in knowing that life is not a check-list of acquisition or achievement. Your qualifications, your CV, are not your life, though you will meet many people of my age and older who confuse the two.

Life is difficult, and complicated, and beyond anyone's total control, and the humility to know that will enable you to survive its vicissitudes.

One of the greatest formative experiences of my life preceded Harry Potter, though it informed much of what I subsequently wrote in those books. This revelation came in the form of one of my earliest day jobs. Though I was sloping off to write stories during my lunch hours, I paid rent in my early 20s, working at the African research department at Amnesty International headquarters.

There in my little office I read hastily scribbled letters smuggled out of totalitarian regimes by men and women who were risking imprisonment to inform the outside world of what was happening to them. I saw photographs of those who had disappeared without trace, sent to Amnesty by their desperate families and friends. I read the testimony of torture victims and saw pictures of their injuries. I opened handwritten, eye-witness accounts of executions, of kidnappings and rapes.

Many of my co-workers were ex-political prisoners, people who had been displaced from their homes, or fled into exile, because they had the temerity to speak against their governments. Visitors to our offices included those who had come to give information, or to try and find out what had happened to those they had left behind.

I shall never forget the African torture victim, a young man no older than I was at the time, who had become mentally ill after all he had endured in his homeland. He trembled uncontrollably as he spoke into a video camera about the brutality inflicted upon him. He was a foot taller than I was, and seemed as fragile as a child. I was given the job of escorting him back to the Underground Station afterwards, and this man whose life had been shattered by cruelty took my hand with exquisite courtesy, and wished me future happiness.

And as long as I live I shall remember walking along an empty corridor and suddenly hearing, from behind a closed door, a scream of pain and horror such as I have never heard since. The door opened, and the researcher poked out her head and told me to run and make a hot drink for the young man sitting with her. She had just had to give him the news that in retaliation for his own outspokenness against his country's regime, his mother had been seized and executed.

Amnesty mobilises thousands of people who have never been tortured or imprisoned for their beliefs to act on behalf of those who have. The power of human empathy, leading to collective action, saves lives, and frees prisoners. Ordinary people, whose personal well-being and security are assured, join together in huge numbers to save people they do not know, and will never meet. My small participation in that process was one of the most humbling and inspiring experiences of my life.

If you choose to use your status and influence to raise your voice on behalf of those who have no voice; if you choose to identify not only with the powerful, but with the powerless; if you retain the ability to imagine yourself into the lives of those who do not have your advantages, then it will not only be your proud families who celebrate your existence, but thousands and millions of people whose reality you have helped change. We do not need magic to change the world, we carry all the power we need inside ourselves already: we have the power to imagine better.

This CEO got fired from his first job