News
Business
Movies
Sports
Cricket
Get Ahead
Money Tips
Shopping
Sign in  |  Create a Rediffmail account
Rediff.com  » Getahead » Confessions of an alumnus: What IIM did not teach me

Confessions of an alumnus: What IIM did not teach me 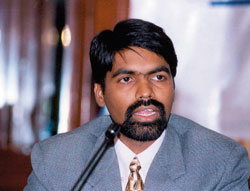 The allegiance to courses is far higher that helping a youngster realise his potential, believes Satya Narayana R, founder of Career Launcher. Having attended an Indian Insitute of Management, he shares his perspective on the B-school scenario and the seachange that is required in India's education system.

The title of this article itself is cliched and over-written. However, I guess it is almost like a love story. Every generation loves hearing and seeing a love story all over again with a fresh and contemporary perspective. Hence, I agreed to write this out by shaking off my own inertia!

I entered B-school a long time ago (I stopped short of saying, 'in the Paleolithic age'!) in 1991-93. I had squandered most of my teenage years trying to get into the Indian cricket team and managed to get nowhere close there. So, my safety parachute turned out to be CAT or MBA entrance exams.

In short, I reached an IIM with little knowledge and just one 'skill' -- of cracking the Delhi University exams through the 10-year question paper solving route. What does that mean? I crawled through the first term to understand debit-credit, first chapter or two of Kotler for marketing etc, while the rest of the batch was running at the speed of a cheetah.

At the end of the first term, my score card read 'D' against two of the easiest courses -- marketing and problems/ stats. And, I was already making my way to the top of the ranking list arranged in the reverse order!

The journey was similarly traumatic despite my best efforts through the six arduous terms at IIM Bangalore. My best efforts got me a 'C' in my exams. By the end of two years, I managed to beat about 15 people in the ranking list -- ranked around 150 in a batch of about 165.

So, what were the things I learnt during my stay at the IIM?

1. I learnt a few fundamentals (or at least the jargon) in areas such as marketing, finance, strategy etc.

2. I learnt that I was in a large crowd of hugely competitive and gifted peers. My best efforts saw me on top at the bottom. Anything less would have gotten me evicted!

3. To my relief, I did learn that I do have a skill or two that were valuable in my world view and that I had it in fair measure...Thankfully, I believed in my own insight.

To cut a long story short, my IIM experience provided me with knowledge that was relevant to appreciate management, business and a career in the corporate sector. Surely, what it gave was necessary for one to get started. Above all, it did give me the "thappa" (stamp) of being an IIM alumnus. Most of the world believes that an IIM alumnus cannot be an 'idiot'. If they come across one, he or she is seen as an exception.

What more does one need to be successful or happy in life? As mentioned, the management knowledge and skills that a B-school provides are necessary, for sure. However, it does not meet the criteria of sufficiency. There are a million or zillion things that are required to sail happily through one's life. A few of them that I could list here are:

Self-belief
Quite sadly, the education system globally is built on a rather dubious scaffolding called 'Relative Grading'. This works against adding to the self-belief. And, not many in a competitive B-school have the innate ability to work around this institutional conspiracy. I guess this is considered too difficult or unimportant by the gurus in the B-school.

Dreaming
It is considered an unthinkable part of the syllabus. Even two decades after I graduated, I have not found courses that allow youngsters to dream, to build fantasies of any kind, to imagine a world that they can build by not worrying about resources or limitations. Expediency, skills, 'realistic assessments' are put on a higher pedestal than dreaming.

Cooperation vs Competition
Successes in life are built around the word called 'cooperation'. Unfortunately, this is a non-existing and much-loathed term in a B-school system that is built on competition deep inside her DNA. Beating others to a game is a much-celebrated attribute. The gifted horses get trained to do that and end up being champs in 'gaming' the whole field of performance. Looking for a win-win way of dealing with life remains mere jargon learnt at B-school, with neither imagination nor belief to practise it in real life.

Choosing your own path
Every happy or success story is an illustration of this truth. B-schools do not look at themselves as ones who will facilitate this inside-out journey. Their allegiance to the courses and demands of the corporate sector are far higher than towards helping a youngster move towards realising his or her potential.

In sum, each individual needs to look at his own way of discovering the million things that he or she needs beyond the 36 courses delivered by a B-school. While this is a piece in the context of a B-school, the handicaps of the system do not alter with other schools (higher education as well as K12) or with geographies (developed or developing economies). A new era of delivering education with allegiance towards the learner is waiting to happen.

In the meantime, the jobs will be back on the B-school campuses and life goes on!

10 vocational courses you should consider