'Good students are sacrificed for the quota system' 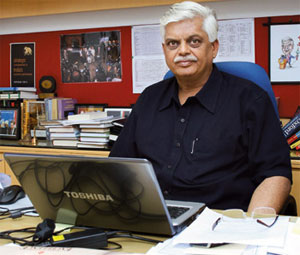 Dr Sanjaya Baru, editor, Business Standard, talks about the lack of respect for education and the need to reward excellence.

Dr Sanjaya Baru, editor, Business Standard, says journalism is in his blood. When he was just 10 years old, he used to type a one-page, weekly newsletter on the goings and comings of his large extended family. And he had a circulation of nine copies! But at heart, Dr Baru is an academician who, twice, took a break from journalism to teach economics in India and abroad.

In between, he also worked as media advisor to Prime Minister Dr Manmohan Singh. In conversation with Sumita Vaid Dixit of Careers360, Dr Baru talks about the lack of respect for education and the need to reward excellence.

You began your career as a teacher but became a journalist. How?

Well, I was a professor for 10 years before I became a journalist. By sheer accident I was called in to interview the then finance minister, Madhu Dandavate, in 1990, for Doordarshan. I discovered journalism was exciting. I joined the Economic Times where Mr TN Ninan was the editor.

Precious lessons that you learnt during your early assignments...

What is your opinion on the state of India's higher education?

India has some fine institutions but there aren't many. We have created an artificial shortage of quality institutions by limiting the number of IITs, IIMs, technical and medical institutes. It's only now that the UPA government is opening up more IITs and IIMs.

The second issue is quality. Even in the existing 'good' universities quality suffers. Universities must be based on the principle of elitism. In simple words, reward good students. The very purpose of a university is to nurture talent. So if the system isn't willing to recognise excellence then the purpose of education is defeated.

Even socialist countries such as Russia and China award excellence; no good student is turned back. But in India even good students fail to get admission because either there aren't enough seats or the admission is sacrificed to the quota system.

Every year Indian students pay $3 billion as tuition fee to study abroad. I don't think UGC has a budget of more than a couple of hundred million dollars. This is the kind of private money that exists in the country. My daughter wanted to study abroad but I was uncomfortable. A lot of parents would like their children to stay with them at least until college and yet they are sending them away at the tender age of 16 and 17. We need world-class universities here, in India.

Would the entry of foreign universities help?

For one, it will reduce the outflow of $3 billion each year (remember our politicians have keen business interest in education). And our students wouldn't have to go abroad when they could get those degrees here, at home. Also, there's a large non-resident Indian (NRI) population in Asia and other Western countries looking for work opportunities in India. Besides, their own children may want to come to India to study.

And there's talk of setting up more universities when there's a shortage of teachers...

One way of dealing with the faculty crisis is having part-time faculty. But the fact is we aren't rewarding the teaching community. Today a 25-year-old journalist with an undergraduate degree gets a higher salary than a college lecturer who has done a PhD.

The value system of our education is flawed; there's no reverence for education. We value education as individuals but not as a nation. Education has not been a priority area for governments for a long time until now.

Why, when education is key to economic progress?

The idea that investment in people is an investment in the economy is a recent phenomenon. Earlier, development meant more steel factories and new seeds. People argued that India's problem was population. An educated person is an asset but an uneducated person is a liability. Population becomes a problem when people aren't productive. One who is a liability today can become an asset tomorrow. It's a simple idea that we in India failed to grasp.

Can we dream of having world-class universities?

Our students and teachers ar as good as any in the world. It is the physical facilities, the infrastructure that is deplorable. Go no further than Southeast Asia to see how good their university infrastructure is, comparable to the top in America. India should learn a few lessons from China.

In a short span, China has built world-class universities. It has set up greenfield universities with large campuses, excellent facilities and invited faculty from all over the world, particularly, Chinese professors who are teaching in other parts of the world.

What could be the media's role in improving the system?

Well, here at Business Standard, we give utmost importance to educationists. But yes, the media has to play a larger role -- that of creating awareness, warning students about fly-by-night educational institutes. In both health and education, we need stricter regulations.

'Learn your profession, learn to be professional'

'To this day we re-use envelopes and pins'