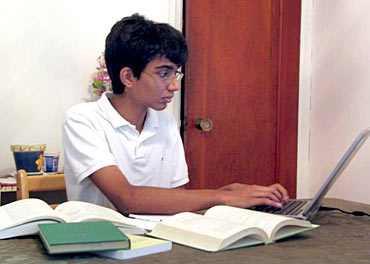 The Intel Foundation that gives the annual Intel Science Talent Search award and is administered by the Society for Science and the Public declared Akhil the third place winner with a $50,000 cash award for his math project on Deligne categories, a setting for studying a wide range of algebraic structures with ties to theoretical physics. The honour was announced during a gala dinner in Washington DC.

'These 40 Intel Science Talent Search finalists demonstrate that we have the capability in this country to cultivate the next generation of innovators, scientists and entrepreneurs,' said Intel president and CEO Paul Otellini.

'These young scientists are proof that curious, eager minds coupled with inspiring, knowledgeable teachers are the foundation for world-changing innovation,' he said referring to the 40 finalists, five of whom were Indian Americans.

Erika DeBenedictis, 18, of Albuquerque, NM, won the top award of $100,000 from the Intel Foundation for her project developing a software navigation system to help improve spacecraft travel through the solar system.

Second place honours and $75,000 went to David Liu, 18, of Saratoga, California, for his work to develop a system to recognise and understand digital images. David's work has already been used to examine aerial images to identify hazards to buried oil pipelines and could also be used to enable unmanned aerial vehicles and web-based image searches.

For Akhil, his life's ambition is to promote the sciences and mathematics.

"It seems doing that would be necessary to address many of the world's current problems," he told rediff.com after being named a finalist in January this year.

Son of Thomas and Rama Madhavarao, Akhil was born in India, but has spent most of his life in New Jersey. According to Intel, Akhil combines algebraic geometry, representation theory, and category theory in his work on Deligne categories of complex rank. Deligne created a large family of categories parametrised by complex numbers which interpolate classical categories, ones in which the complex number in question is a positive integer.

In his project Akhil showed that under certain finiteness assumptions important properties of these categories are determined by constructible sets. He then showed that these properties hold generically if they hold on a sufficiently large set of parameters.

Evidently, Akhil is mostly devoted to academics. He is a tutor in chemistry, math and French at Madison High School, where he is also active in the chess club.

Since eighth grade, he has taken courses at Drew University, where he recently assisted in preparing a math textbook for publication. He is moderator of an online math forum run by Johns Hopkins University. Is there anything else that interests him besides academics?

"I play tennis casually and volunteer at the public library as a chess teacher for elementary school students," he said in a terse response. He mentioned his former mentor and current teacher Sinan Gunturk of New York University who taught him a great deal about analysis and got him seriously interested in doing mathematical research.

Akhil hopes to continue his studies at Harvard or MIT.

Although Akhil was the only Indian American to reach the top ten, the remaining 30 finalists each received at least $7,500 in awards.

'The Science Talent Search was founded on the idea that scientific accomplishment is the first step on the road toward solving the world's most challenging problems,' said Elizabeth Marincola, the organisation's president. 'Society for Science & the Public is proud to join Intel in congratulating Erika and all of the Intel Science Talent Search 2010 finalists. Their hard work and dedication will inspire other budding scientists to take their first steps down the road of discovery.'