News
Business
Movies
Sports
Cricket
Get Ahead
Money Tips
Shopping
Sign in  |  Create a Rediffmail account
Rediff.com  » Getahead » It's official: Women use their gender like a weapon!

It's official: Women use their gender like a weapon! 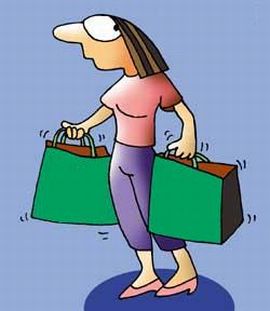 "Because I'm a woman." That's the standard refrain when women want to avoid doing something they don't like! Illustration: Uttam Ghosh

Scientists have proven that women frequently use their sex as a get-out clause for everything from crying to their failure to take the bins out.

A survey found that 88 per cent of respondents had used their sex as an excuse at some point, while more than half admitted they did so regularly.

Driving was the most common scenario, with 67 per cent blaming their poor parking on being a woman, reports the Daily Mail. More than half of women blamed their gender on their inability to catch spiders in the bath -- while slightly fewer than half used it to avoid carrying heavy items.

The news follows Katie Price's admission in court last week that she had swerved while driving her pink horsebox because she was a 'typical woman driver'.

The top ten situations in which women are likely to use their gender as an excuse:

Sarah Heath, of MyCelebrityFashion.co.uk, said, "Whilst it was surprising to find just how many women do use the excuse, it's important to bear in mind that the majority admitted to doing so in a 'jokey' manner."

Men tend to overrate their own sexual prowess!