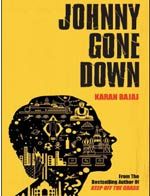 Johnny Gone Down is Karan Bajaj's second literary effort, following his best-selling debut novel Keep off the Grass, the story of an American banker who decides to quit everything to embark on a psuedo-spiritual quest in India.

Bajaj's latest book follows Nikhil Arya on an innocent vacation that turns into an epic intercontinental journey that sees the protagonist become first a genocide survivor, then a Buddhist monk, a drug lord, a homeless accountant, a software mogul and a deadly game fighter.

Now, twenty years later, Nikhil aka Johnny is tired of running. With the Columbian mafia on his trail and his abandoned wife and son ten thousand miles away, he prepares for his final act, aware that he will have lost even if he wins.

Here we present an excerpt from the book:

The little boy, presumably her son, looked away reluctantly. He fixed his attention outside the window as the train sped through the vast, arid plains of central India.

My son would look like him perhaps, I thought suddenly. If he were alive, that is. In the part of the world where he was growing up, infant mortality is as common as UFO sightings in America. The son I abandoned without seeing his face, feeling his breath, or touching his fingers -- yet another life I had destroyed in my Faustian journey. It didn't hurt to think about it any more. Nothing hurt. I felt nothing, I thought nothing; just the moment now, the journey here. I would be crushed under the weight of my regrets if I allowed myself the luxury.

The boy, angelic face streaked with soot, soon began to tire of looking outside and started stealing glances at me once again.

'His left arm is missing,' he burst out finally. 'He is an amputee, Mama, isn't he? Amputated.' The boy, seven, maybe eight years old, had clearly learnt a new word and was beside himself with joy to see a live example in front of him.

His mother, a tall, young, big-boned lady with a firm, determined jaw and hard cheekbones, pounced on him, slapping him across his face.

It seemed strange to speak in Hindi after so many years. I had been gone far too long. I was back now, and it wasn't a triumphant return by any means, but this was home. Everything had changed, yet nothing had changed.

'I'm really sorry,' said the mother as the boy escaped her grasp, staring at me in frank admiration.

'Not at all. He is very observant,' I said, managing to smile at the boy. His face lit up. He now had the licence to stare openly at me, and his eyes darted from my stump to the punctured holes in my right wrist where they'd forced in the tubes.

'Are you going to Delhi?' asked the mother, still frowning at her boy.

'You live in Bombay now?' she asked.

I smiled. If I had missed anything in the twenty years I'd been gone, it was this uniquely Indian gift for immediate familiarity, the unabashed probing followed by a quick judgement on another's choices. In another life, I'd probably have warmed up to the interrogation. Now, every question unleashed an avalanche of memories -- none of them  pleasant.

'No,' I said shortly. 'I am coming from overseas.'

A sophisticated but defeated looking middle-aged man, the fourth occupant of our second-class Bombay-Delhi train compartment, buried in his newspaper all this while, perked up suddenly. He put down his newspaper, adjusted his thick spectacles and stared at me, his thick lips and dark moustache quivering, perhaps in anticipation of a debate which would ease the monotony of the twenty-four-hour journey in the hot Indian summer.

'What's the use of going abroad nowadays?' he said. 'Everything is in India.'

He picked up his newspaper again and pointed to the picture of a short, dark man on the front page. 'Look, Rahman is going to compose music on Broadway. Is he any less than Elton John? Is Shah Rukh Khan any less than Brad Pitt? All of Hollywood is coming to Bollywood now. India is going to be the next superpower. Why go anywhere else?'

I nodded noncommittally. None of these names sounded familiar. I had just risen from the dead. In the world I came from, there were no movies, no music, no life. Only time and darkness, boundless and pervasive, enough to last several lifetimes and then some more.

'How long were you abroad? Where were you?' the man asked; tall, erect body with just the beginnings of a paunch shifting as he spoke.

'Twenty-five years,' I said, wishing he would keep quiet. 'I've been in different places.'

'Twenty-five years!' he exclaimed. 'If I were to guess, you must be my age, forty or forty-five years old. That means you've been away since you were, what, fifteen or twenty.'

'What did you get from it?' he asked.

Suddenly, I wanted to be alone in the darkness of my thoughts. I knew he didn't mean to offend; he was just a bored, curious man, intending to provoke, discuss, argue -- it helped kill the time. But I had nothing to say, no desire for this conversation, or any other conversation for that matter.

'Arre,' said the woman, breaking in before I got the chance to mutter a response, 'not everything is about getting and giving, gaining and losing, victory and defeat. Imagine living twenty years in different countries! How much experience he has had; how many lives he has lived! Compared to him, we are like frogs in the well, jumping about in our tiny worlds without ever seeing the light outside.'

'The deer wandered restlessly from forest to forest, searching for the divine fragrance, not knowing that the musk rested in his own belly,' the man said smugly. 'Th e only light that needs to shine is the one in your own mind.'

'You are a strange one,' said the woman condescendingly. 'Not all who wander are lost. Besides, he must come back home to India almost every year. That's what my sister in the US does. She spends more time with my parents than I do, though I live in India.' She turned to me. 'Don't you?'

I shook my head.

'How often do you come back?' she asked.

'You didn't come to India even once in twenty-five years?' she said incredulously.

I shook my head again. 'I didn't get a chance.'

Excerpted from Johnny Gone Down (Rs 99) by Karan Bajaj, with the permission of the author and publishers HarperCollins Publishers India.

Excerpt: 'Mother could not think beyond marriage'

Excerpt: 'I loved Rajni and abided by all her...