News
Business
Movies
Sports
Cricket
Get Ahead
Money Tips
Shopping
Sign in  |  Create a Rediffmail account
Rediff.com  » Getahead » 'I will teach you to be rich' says this blogger

'I will teach you to be rich' says this blogger

Negotiate like an Indian and defer wants, were the two thumbrules personal finance blogger Ramit Sethi learnt from his parents, he tells P Rajendran. 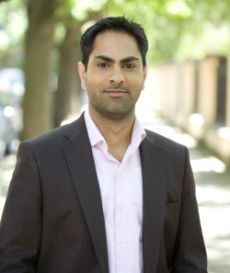 Money is just like food, says Ramit Sethi. People feel guilty about the rate at which they consume it and fervently promise themselves to do something about it. And, of course, don't.

Sethi enjoys the rage of economists who don't consider the vagaries of human behaviour when dealing with personal finances. In a novel take for a personal finance expert, he believes that unless the underlying mindset is changed -- or subverted -- people cannot really take charge of their finances.

Best known as the man behind the personal finance blog I Will Teach You to be Rich, Sethi has a book by the same name out, and hosts other blogs, too. He has been quoted in the Wall Street Journal, ABC News and, among other things, has written guest pieces in The New York Times. And the blog is also his full-time job.

Sethi, who is based in California, really got into personal finance around the time he was headed for college. When he got a $2,000 scholarship in his name instead of that of his parents, he put it all in stocks. After promptly losing half of it, he decided he ought to learn how personal finance worked. He concluded that a few principles worked, while the rest was noise.

With the fervour of a recent convert, Sethi tried to teach my friends. He put together a free course titled, 'I will teach you to be rich'. His friends said it was great idea but did not show up. He finally started a blog in 2004, and, after his persistence paid off and he got the Wall Street Journal to quote him, the blog took off.

Sethi says his parents taught him some things about money. "A lot of it was to defer needs." Sethi then corrects himself, "Defer wants. The biggest thing I learned was my parents was what I call negotiating like an Indian. I've said this on national television and they always look so alarmed when I say it. It just cracks me up. Anyone who's Indian is going to know exactly what I mean."

"Negotiate like an Indian means you are not afraid to ask (for a better deal). You realise that it's a game. You aren't taking advantage of someone by asking them. Because the merchant is always smart. They're going to sell you something at a profit, no matter what. These are things I learned when I went to New Delhi, where my family is. These are things that my mom and dad teach me here in America."

He cites the example of his cable company. He says he can call them and tell them that in these tough times they need to do something to keep him on. They could offer him a promotional fee for the next year with 30 dollars off a month. "That's 400 dollars a year just for that one phone call. You can do it with car insurance. You can do it with overdraft fees. You can do it with almost anything."

He says he learned that consumers have the power, not the companies. "And anyone in India will be rolling their eyes because that's the way business is done (there)."

Sethi also learned about judicious financial management from the way his father handled money and how his mother packed lunch when going on trips to save the 40 dollars that usually went to some restaurant.

But he also disagrees with the Indian concept of wholesale frugality. He believes that if there was something he desired he could buy it as long as he cut costs elsewhere. Sethi says that while he provides advice on personal finance, most personal finance advisors are usually nags who don't allow for the vagaries of human behaviour.

"That doesn't work. These people have been nagged for 50 years, and they just hear and shut it down," says Sethi, who graduated in technology and psychology from Stanford. "People think frugality is about saying no, no, no," says Sethi, whose own technique allows for an odd burst of extravagance.

He calls it the CEO model: Cut costs. Earn more. Optimise through spending -- that is negotiating your cable bill etc.

And he also feels Indians, like Americans, overrate real estate. He believes that, instead, Indians should invest in the long term, avoiding "get-rich-quick schemes despite the scammy-sounding name of the book." He laughs.

What about traditions that make a virtue of abnegation --uch as the Jain and Buddhist views?

"No one is doing it. Too many people believe that if I just say it over and over, people will listen. Well, people haven't listened for the last 50 years." Sethi clarifies that he is talking about his specific audience of 20- to 30-year-olds.

Then he comes up with his comparison of money with food. "When it comes to food we feel guilty that we're eating too much. We make promises that we're going to go to the gym -- someday. And then we get overwhelmed by the amount of information -- in terms of dieting and health." And then people debate the minutiae about lowering a few calories here and there.

"None of that matters. People are debating these small terms, not realising that the biggest thing that they need to worry about is exercising more and eating less."

This applies to money, too, he says. "Now let's go over to the money side. Money! We feel guilty because we are overwhelmed by the amount of information: Stocks! Bonds! Asset allocation! Diversification! And then we debate minutiae. These people don't even spend a day reading a good finance book or study how to improve their 401 K," he says.

"Food and money are very similar."

The solution is to gain control of the money, says Sethi. This does not mean spending less on things people love, just ensuring that some money is saved. He suggests that people rely on small steps instead of grand strategies to save -- and make -- money.

Sethi relies on the views of his readers, often seeking feedback from them. With 300,000 visitors a month, most of them younger people, he has a big audience to draw upon. He says he knows the best times to blog to get the early sets from both the East and West coasts, how to keep after people to ensure the blog is noticed while making sure the content is rich enough to be worth revisiting.

And the blogs are often rich in detail, breaking up complex ideas into smaller, more digestible chunks. Just the kind of material that people can go for without getting overwhelmed.

However much he may worry that his site sounds like a scam, Sethi is certainly serious about I Want to Teach You to be Rich.

Five of his favourite blogs:

Calnewport.com: about getting top grades

Copyblogger.com, which teaches people how to blog.